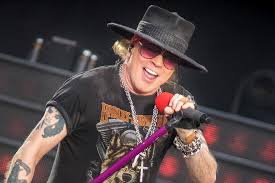 According to The Pulse Of Radio, GUNS N’ ROSES singer Axl Rose put Kanye West on blast after the rapper’s appearance at the White House on Thursday (October 11), in which Westdelivered a rambling 10-minute monologue that addressed topics ranging from violence in Chicago to “flyest” cars. The nearly incoherent rant appeared to leave even Donald Trump — not exactly known for his own speechmaking skills — at a loss for words.

But not Axl, who wrote on Twitter: “What a joke. Not gonna solve anything in Chicago or anywhere else with any of that attention-seeking nonsense.” He quickly added: “Oh n’ don’t let any of this distract from the Khashoggi killing,” a reference to the recent disappearance of a prominent journalist who many believe was murdered on the orders of the Saudi government.

Axl is no fan of the current occupant of the Oval Office either, having taken to Twitter a number of times in the past couple of years to slam Trump, his administration and his policies.

West was among several musicians who visited Trump on Thursday as the latter signed the Music Modernization Act into law after an effort that began years ago and was renewed in 2017. Although West wasn’t present for the signing, Kid Rock and members of the BEACH BOYS, DOOBIE BROTHERS, SAM & DAVE and other acts were on hand. According to Billboard, the legislation updates the music licensing process with modern technology and greater transparency to speed royalty payments to music publishers and songwriters, and also provides digital streaming services with increased efficiency and greater certainty.

Back in November 2016, Rose took to Twitter to condemn then-President-elect Donald Trump‘s choice for U.S. attorney general, and to berate Trump for demanding an apology from the cast of the Broadway show “Hamilton” after then-Vice President-elect Mike Pence was booed when he attended the musical. One month later, Rose invited fans at a GUNS N’ ROSESconcert in Mexico City to beat the crap out of a large piñata designed to look like Trump.

This past January, Axl blasted the Trump administration as the “gold standard of what can be considered disgraceful.”

(As reported on Blabbermouth.net)

What a joke. Not gonna solve anything in Chicago or anywhere else with any of that attention seeking nonsense.

Oh n’ don’t let any of this distract from the Khashoggi killing.