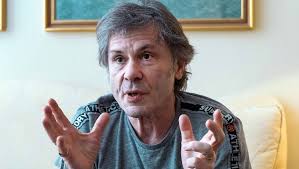 IRON MAIDEN’s BRUCE DICKINSON: Why I Voted For Brexit

IRON MAIDEN singer Bruce Dickinson has defended his decision to vote for Brexit, saying that the United Kingdom’s plan to leave the European Union (EU) will enable the country “to be more flexible.”

A public vote — called a referendum — was held in June 2016 when voters were asked just one question: whether the U.K. should leave or remain in the EU, a group of 28 countries which trade with each other and allow anyone to easily move between the countries to live and work. The “Leave” side won (by nearly 52% to 48%) but the exit didn’t happen straight away — it is slated to take place in March 2019.

The Brexit vote has thrown the U.K. into a period of uncertainty, with some economists warning that it may lead to a downturn in the British economy while other people have claimed that it will help the U.K. negotiate better terms with the EU. A poll showed that many voters opted for Brexit because they “wanted the U.K. to regain control over EU immigration.”

Admitting that he was one of the people who voted for Brexit, Dickinson told the French news magazine L’Obs that he is “quite relaxed about the idea” of the United Kingdom separating from the European Union.

“If musicians were running Europe, Europe would run a lot better because we’d all get on with each other and say, ‘Yeah,'” the vocalist said (see video below).

British Prime Minister Theresa May has flatly refused to hold a second referendum although many who voted to leave in the first vote were misled by propaganda claiming Brexit would be painless and scare tactics stirring fear of migrants.

“There’s a lot of nonsense and scare stories being made up by… both sides, actually, which I think is pretty immature,” Dickinson noted. But the singer believes that Brexit will ultimately “enable us to be more flexible, and I think that people in Europe will get an advantage from that.

“What you have at the moment is effectively the European Union obviously not doing a very good job satisfying the democracies of Europe,” he explained. “A lot of people — not just Brexit, but all kinds of other people, whether it’s the Italians or the Greeks or the Hungarians or the Catalans, or whoever it is — are all having big populist movements. It’s because their needs — their democractic needs — are not being addressed by Brussels. The right people to address the needs is the democratically elected leaders.”

Referring to the fact that the EU has been accused by some politicians of attempting to humiliate Britain over Brexit, Dickinson said: “It’s absurd to think that the fifth biggest economy in the world is going to be somehow punished for democratic decisions made by its people.

“The EU has always been seen us as basically just a market — a common market — and that has some advantages; it makes sense,” he said. “But there’s no desire for most people in England — even people who voted to remain in the EU — there’s no desire to become part of a federal system. And I think that’s a big mistake.

“Britain has always been a trading nation with the rest of the world,” he continued. “Only since the 1960s has Britain started to look only at Europe as being a source of trade, and I think ultimately that’s ended up being a big mistake.

“Brexit actually opens our borders; Brexit opens the United Kingdom to the whole of the world,” Dickinson insisted.

The singer went on to say that he is optimistic that the U.K. will be able to build a new positive future relationship with the EU once Brexit takes effect.

“Whatever deal is going to be done on Brexit will not change the status of the U.K. by very much, but I think it will enhance our economic capabilities,” he said. “And that’s good for us, and it’s actually, in the long run, good for Europe as well. ‘Cause as the fifth largest economy in the world, Europe would like access to our market. And rapidly after that, people will forget about all this nonsense about Brexit and just say, ‘There is a new relationship with the U.K. That’s it. End of story.’ And we can all get on with doing what we should be doing, which is getting on with each other, trading with each other, making music, making love and making sure that Vladimir Putin doesn’t come and end up ruling our country.”

One Reply to “IRON MAIDEN’s BRUCE DICKINSON: Why I Voted For Brexit”